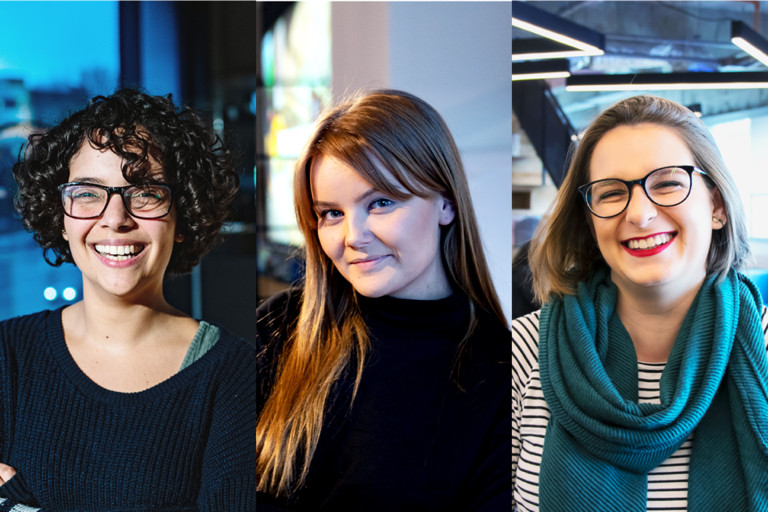 In our interview series for Women’s Day, we already met a couple of amazing female employees and let them talk about their inspirations and life at SumUp. In this interview, that is closing the series, we met Amanda Duarte (Senior Communication Analyst, Brazil), Andrea Pereira (Talent Acquisition Lead EU, Berlin) and Matilda Kaarna (Support Team Lead – Nordics, Berlin).

Let’s jump into diversity and leadership…

If you could meet an impactful person, who would you meet and what would you talk about?

Amanda: I’d definitely want to meet Malala, and talk about her strength to fight for education. I’d love to know more about the mind and heart of such a brilliant woman.

Andrea: One of my favourite composers of all times is Chiquinha Gonzaga and I would love to have the superpower to revive her just to hear her talk about her life. She was a mixed-race woman, born in Brazil before slavery was abolished (the late 1800s). She left her husband to live for her art and has written some of the most beautiful popular music pieces I've studied. She raised two kids on her own and was a civil rights activist, fighting for the abolition of slavery and women's rights. And she did all that in an age in which women, and especially women of colour, had no voice.

Matilda: I would like to meet my great grandmothers. I would like to talk about how things have changed since their time. How they managed to take care of the entire family during the wars and difficult times, and how now, most women are doing the same thing, whilst providing for their family.

What can you recommend to every woman?

Amanda: Recently, I read a book that I think every woman should read, called “How to Stop Feeling Like Sht”, by Andrea Owen. She talks about habits that we as women are used to having since we’re girls and don’t even realise it.* Besides that, she teaches in a very funny and informal way how to fight those behaviours and empower ourselves.

Andrea: Any book by Chimamanda Ngozi Adichie. In fact, I've given copies of her feminist manifesto to some of my friends at SumUp. It's very powerful to see this strong (yet flawed and approachable) Nigerian woman discussing complex themes like gender, race and religion in a very natural and relatable way. Also anything by Maya Angelou: "I know why the caged bird sings" is a good book to start.

I would also recommend the documentaries "The Death and Life of Marsha P. Johnson" and "Paris is Burning". I believe we can't talk about empowering women without including trans women in our claims. That's why for me it's key to educate ourselves in the history of the LGBTIQ+ movement and both of these documentaries are a good starting point.

Matilda: Believe in yourself. Sounds like a cliche but that is the most important thing.

Amanda: The chance to leave my mark in the organisation and to get to know so many incredible people by working with them. When you’re a leader, you end up being part of such amazing journeys, and I’m really thankful for guiding my team’s journeys.

What are the challenges in hiring a diverse team?

Andrea: There are so many challenges, I honestly feel that I can go on for ages on this topic.

For me, a major challenge for diversity is the lack of representation. Whether it's gender, sexual orientation, nationality, religion or social background, there's a lack of representation on the mainstream media and corporate environment that creates a "limit" to people's dreams. It's very hard to aspire to be something you can't see or relate to. Recently in Brazil (where I'm from) - for the first time in history - a black woman became the anchor of the main television news show of the country. It's insane that she's the first black woman in history to conquer that space, especially in a country that is majorly composed of black and mixed-race population. This woman became a role model for black girls all over Brazil: she made it, she's real, so why can't I make it too?

Another key aspect behind diversity is inclusion. It's not just a matter of hiring women, POC or LGBTIQ+, it's a matter of giving these groups a safe space to speak up, be themselves and challenge the status quo. It's important to recognise that not everyone is educated on diversity topics, so the first thing we need to do is take the time to build the basics. We must generate awareness around topics like unconscious biases, microaggressions and privilege. I believe the most effective way to do so is to engage in a dialogue that speaks to people's emotions but also has a solid academic and statistic basis. No one is born deconstructed, if we want to change the world we need to be patient, kind and feel comfortable engaging in difficult conversations.

Thanks for this inspiring interview, girls! Check out our previous interview with Leticia, Global VP People in Brazil. To stay up to date about SumUp and it’s amazing team, follow us on Facebook, Twitter or Instagram.